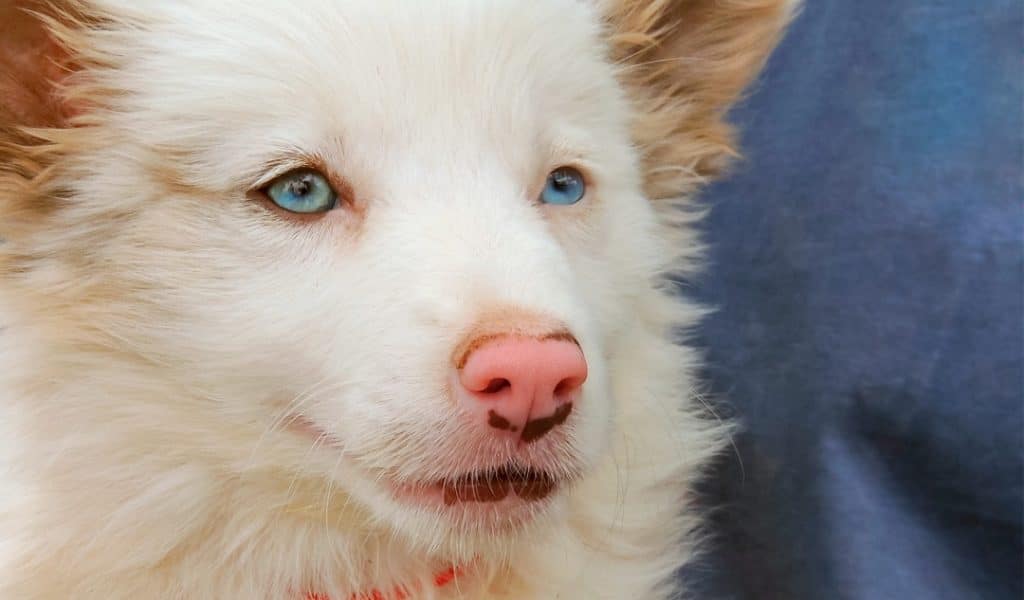 Double merle is a genetically recessive gene that causes puppies to have eye coloration, skin coloration, and hearing abilities that are not typical. It may also cause them to be more prone to deafness than usual. To help you learn how to care for double merles, you should continue reading. This blog post will introduce the basics of what it means to own one. We'll take an in-depth look at everything from their appearance traits all the way down to their health issues so that you can make an informed decision about whether or not owning one would be suitable for your family.

Because a double merle dog is the result of a mother with the merle gene and a father with the merle gene, he or she possesses two copies of the variegated color pattern. This can make it hard to get color pigment in their coat, but they could be all white or have minimal coloring on their coat. However not all white dogs are considered double merles. There are naturally white dogs that doesn't have the merle gene. An excellent example of this is the White Swiss Shepherd dog.

Not all dogs born to parents that have the merle gene will be double merles. But breeding merles together is unpredictable and unhealthy.

How to Distinguish a Merle Dog?

Genes are made of DNA which is passed from parent dogs to their puppies. If you have a big mother and father, then they could pass on the 'big' gene to their puppies. But if a dog has a small mom and dad, it will not be as likely to be significant when they grow up.

Dogs of various origins, such as Australian and Spanish breeds are known for their wide variety of dogs. Despite its diversity, not all breeds are capable of producing double merles.

Merle is a dog gene that influences the color of their fur. There are many kinds of it in different breeds. A dog with this gene often has patterns on its fur that show the gene, but not always, so you cannot be sure if they have it or not.

A merle coat is made of dark and light colors mixed together. As a puppy gets older, it will get darker in its coat.

Many people like the merle coloring in dogs and want to have a merle dog. This is why breeders keep breeding these dogs to create more.

A dog with two colors, like blue or green eyes, is called merle.

A merle dog isn't the same as a double-merle dog, but they might be confused because they look similar.

Characteristics of a Double Merle Dog

Merle is a gene. Dogs with this gene have stripes on their fur. You can pass the gene to all your puppies, or not at all. But if you are a female dog and you mate with a male dog who also has the merle gene, one out of every four puppies will be double merles.

This statistic does not change. It is the same no matter what dog breed or how much 'merle' is in the parents.

It is impossible for a merle to be bred with another merle. If your dog is a merle, I recommend that you get it sterilized or that you keep it away from other dogs.

Double merles can have a full white coat, and their double merle genes may cause them to be unable to produce pigment. The double merle gene affects the dog's ability to create pigment, resulting in patches of mottled or merle colors in its coat. Double merles might suffer from hearing loss or blindness as a result of the condition.

A DNA test can show if a dog has the merle gene or what breeds are in them. You can do this by going to Paw Print Genetics or Embark.

Is Your Dog a Double Merle?

It can be tough to tell if your dog is a merle or a double merle. Merles come in many different breeds and have other genes that cause white coloring. This has nothing to do with the double merle gene.

The appearance of Border Collies have a white tail, tail tip, feet, and face. And some Collies have fur that is primarily white, but they don't carry the double-merle gene. Other dogs have such minimal merle gene you can hardly tell them apart from non-merles - but they are still genetically a double merle.

If your dog has some white and some merle patches, is it a double merle? Well, not necessarily. Your dog is only a double merle if it has at least one spot with no white or other colors except for the black and blue spots.

To spot if your dog is a merle or a double merle, you should look for two ways:

By examining your dog, you may determine whether he or she is a double merle. The following are possible symptoms of having the double merle gene:

The following dog breeds are known for carrying the merle gene and have a merle coat:

Is a Double Merle Dangerous?

Because their skin is sensitive and light, especially if they like sunbathing as some dogs do, non-blacks can have issues with black dogs. Non-blacks are susceptible to problems such as blindness, deafness, or cancer caused by the sun due to their skin's sensitivity and lightness.

Many double merle dogs are deaf in one or both ears. This is because they have two different genes for color, and the one that has a trait for being deaf ends up being so. The eye color does not affect if a dog will be deaf or not.

Sometimes, when a dog is born with tiny eyes that cannot see, the eyes need to be taken out.

Double merles are a type of dog that has a higher risk of hearing and sight problems. But they are also very healthy animals. But it isn't a good idea to breed two single merle dogs together because the puppies might have health issues too.

Double merles are usually healthy. They're also a lot of fun to have in your family.

To learn more about double merles and its effects, you can visit this link.

How would I know if my dog is a double merle?

Dogs with the double merle gene may have patches of white on their head, back, and base of the tail. They may have light-colored paw pads. They might have blue, green, or brown eyes.

Can a double merle be healthy?

Merle dogs can be healthy as other colors. They live the same amount of time. They are solid and intelligent like other dogs too.

What causes a double merle?

When two merle dogs are bred, they make a double merle. It doesn't matter what color the dog is. A double merle gets the merle gene twice. One copy of the gene causes lighter spots in their coat.

What dog breeds can be double merle?

A double merle is a pup that has two copies of the merle gene. This gene can be found in many breeds, including Aussies and collies, Danes and Catahoula, dachshunds, and chihuahuas.

Why are merle dogs expensive?

Merle dogs are expensive because people want to buy them. People think the pattern is cool, and they will pay a lot of money for it. Plus, merle dogs can be rare in some breeds, so there is even more demand for them.

Why are merle dogs bad?

It is known that merle-coated dogs have a slightly increased risk of hearing problems. They might have these problems because they have two copies of the Silv gene. So if a dog has two copies, then they might be at a higher risk for hearing problems.

Merle is a rare color for Dachshunds. It can be seen in three coat colors: long, short, and wire-haired. The AKC show standard says that merle is allowed to be shown at shows. These dogs score high in the conformation department when the spots are small and even.

Do all merle dogs have blue eyes?

Merle is a type of dog that has blue or partly blue eyes and pink noses. They can also have red fur. If two merles breed, the puppies could be merles, too. These puppies could have a red coat as well as the other colors on their hair.

Are all merle dogs deaf?

Double Merle dogs have a high chance of being deaf, blind, or both. Double Merles can be deaf because of a lack of pigment in their inner ears. They also have vision problems because of their eyes.